Toward Coexistence with Robots

In recent years, robots have been widely applied in many fields. Factory automation already has a long history but automation is currently extending to warehouses, farms, offices, and even homes. Our mission is to accelerate this trend and realize an efficient society. Ultimately, we aim to create a society in which robots do boring and dangerous tasks while humans engage in work requiring their mind and heart.

We propose innovative robotic applications by both discovering and creating unknown market needs and technology seeds. Innovative ideas are born from the connection with people and society. Tokyo is among the best places in the world to create novel robotic applications because of its many potential customers, universities and institutes conducting cutting-edge research, and highly skilled small factories. For this reason, our company is based in Tokyo and is named Tokyo Robotics. 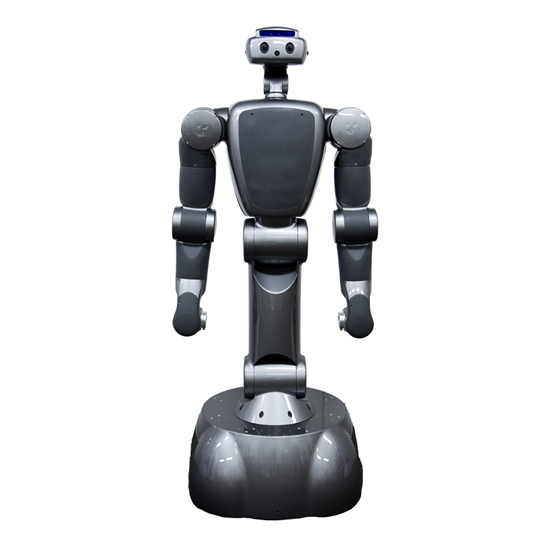 Torobo is a robot developed to accelerate research on industrial applications of full-body humanoid robots. Equipped with torque sensors in all the joints of its arms and waist, Torobo is capable of high-performance impedance control and force control. It can be used to automate tasks that involve active contact with people, the environment, and objects, as well as for applied machine learning research. 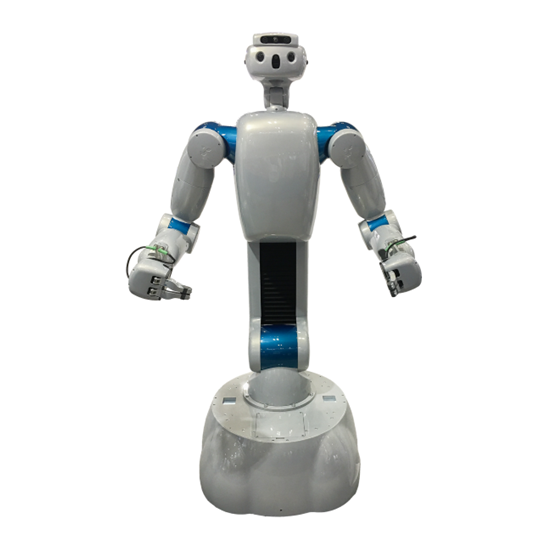 Unlike Torobo, Toala is not equipped with joint torque sensors, but it is capable of contact stop and simple impedance control by torque detection based on current value (disturbance observer). Toala is intended for customers who want to verify advanced automation using a dual-arm robot in a more practical way. 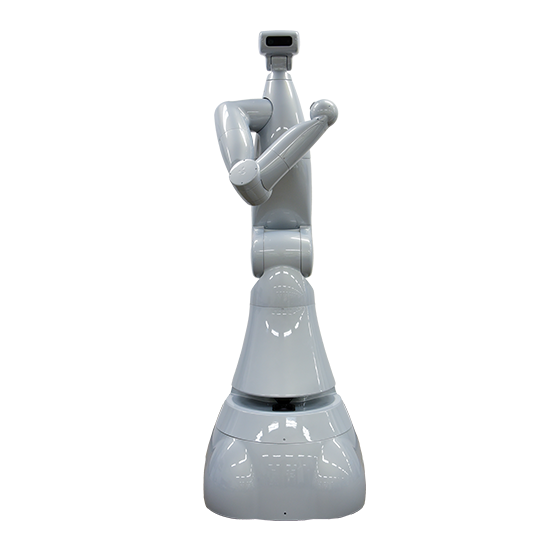 Tolon is an easy-to-use mobile manipulator that can work in narrow spaces thanks to its asymmetrical arm arrangement and omni-directional mobile base. Tolon is a powerful tool for the R&D of next-generation autonomous robots that combine autonomous movement with image recognition for manipulation, and for the development of robot applications such as material handling, short-distance transport, patrols, etc. 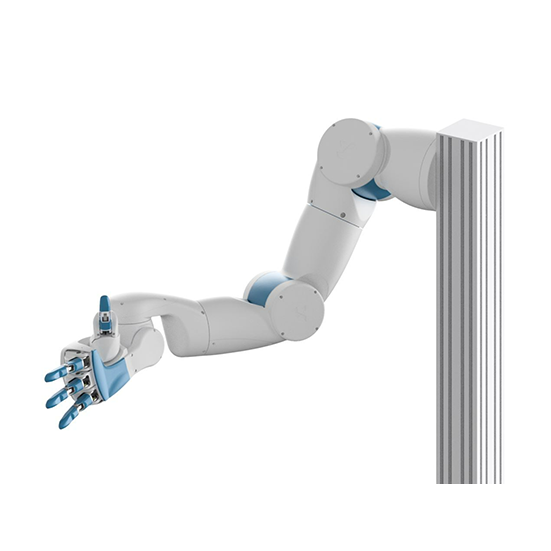 This is an arm-hand integrated manipulator that combines a force-controllable (impedance-controlled) robotic arm and a multi-axis, multi-fingered hand with tactile sensors. It is ideal for research on advanced object manipulation using machine learning. 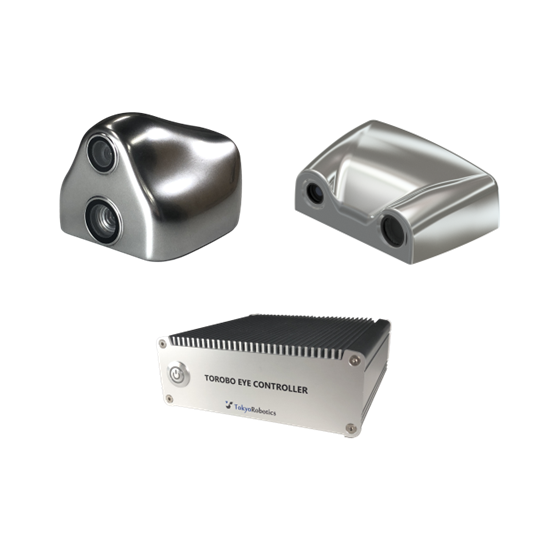 Torobo Eye is a compact and lightweight 3D camera developed as a vision sensor for robots. It uses structured light 3D measurement to acquire high-definition 3D images. It is suitable not only for fixed installation but also for operation mounted on the tip of small- to medium-sized robotic arms including mobile manipulators. 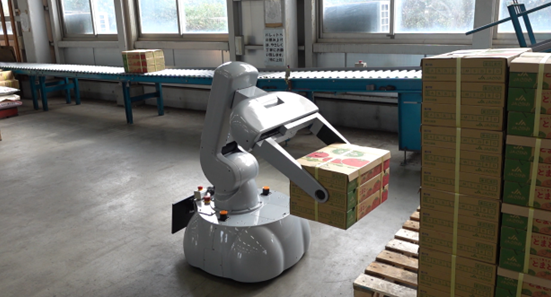 We are developing solutions for logistics using Mobile Grippers™ and mobile manipulators, which travel autonomously and perform object handling. We aim to automate tasks such as palletizing, depalletizing, and case/piece picking from shelves in small- and medium-sized warehouses and factories. System development and on-site verification are currently underway. 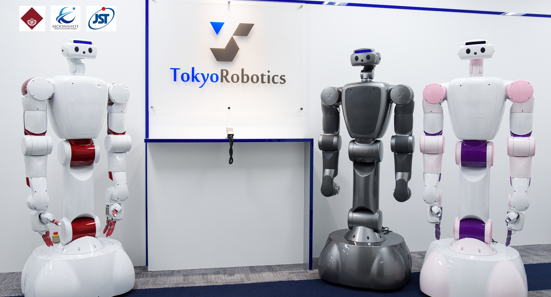 We support the JST Moonshot Project by Waseda University and co-develop a teleoperated robot with NTT Communications. We are also conducting various research and development activities in-house. 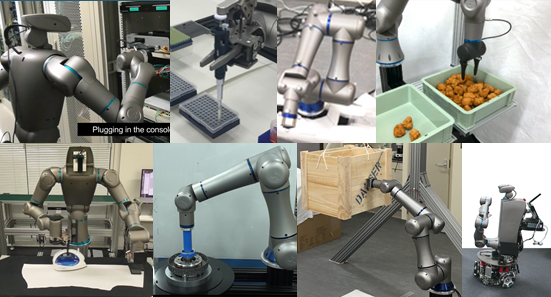 We conduct a feasibility study on a contract basis for a new automation application with autonomous robots. We have worked with JA (Japan Agricultural Cooperatives), JUKI, Yamaha Motor, and JFE Steel, etc.

This is a demo of automatic case handling using a mobile manipulator "Tolon" and a Mobile Gripper(TM). They recognize boxes and conveyors, and conduct the task autonomously.

This video shows the basic performance of humanoid robot “Torobo”, which is used as a research platform for JST’s Moonshot R&D program (Goal 3: Smart Robot that is Close to One Person for a Lifetime).

This video shows the basic performance of a humanoid robot Toala. By estimating the external force from the motor current value, impedance control is possible without joint torque sensors.

Tolon is a mobile manipulator that can work in narrow spaces thanks to its asymmetrical arm arrangement and omni-directional mobile base. It is ideal for the development of autonomous robots that automate material handling, short-distance transport, security, patrolling, etc.

This is an application of a bilateral control system, which can transmit external force of a humanoid robot to its operator. This system is a result of joint development since we were selected for the Open Innovation Program by NTT Communications in 2019.

This is a demo of remotely controlled Toala, a humanoid robot capable of force control without joint torque sensors. Noitom's Perception Neuron PRO is used as the control device. This system is provided as an optional extra of Toala.

This is a demo of automatic palletizing with a Mobile Gripper(TM). By using left and right independent movable grippers and force detection, cardboard boxes are stacked without gaps.

This is a prototype of a 7-axis force-controlled cooperative robot arm jointly developed by Yamaha Motor and Tokyo Robotics. The arm can be controlled as if there is a spring at the end of the arm.

This is a demo of force and position control of a humanoid robot from a remote location using bilateral control over a network. This is the result of joint work with NTT Communications.

Deformation and slip detection of objects with tactile sensor array

This is a demo of picking irregular-shaped objects (Karaage). The pick and place movement in 2.2 seconds (at the fastest) per Karaage was achieved by using a Torobo Eye SL40 3D camera.

This is a demo of folding cloth. The folding width is adjusted by using image processing. It was carried out at the request of JUKI Corporation.